I’m seeing a lot of people post this sentiment on Facebook lately and I’ve had to sit on my hands to avoid commenting. It shows up as a status update or as an image file with the quote on it. And inevitably the order that if you’re not a horrible sociopath who doesn’t care about anyone but yourself you’ll share it on social media. Because that’s how chain letters work nowadays: Guilt. I’m not passing this one one and I’ll tell you why. 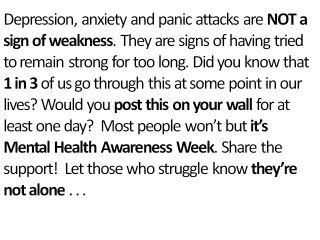 First, I’d like to preface by saying that Depression and Anxiety disorders are something I’m familiar with. Intimately familiar with on both the side of the caregiver and of the person who is suffering from these disorders. So this is not me casting stones at those with mental health disorders. That would seriously not be cool. I’m all for education and better understanding of mental health issues. That’s the point. Misinformation really doesn’t help anyone. Even if it’s misinformation that’s designed to counter other seemingly more harmful misconceptions.

This idea that being strong for too long leads to depression seems to me to play into old stereotypes of (especially) women having ‘nervous breakdowns’ because they just couldn’t take it anymore. There’s a whole lot of unnecessary baggage and negative connotations that are bound up in the idea of people having ‘breakdowns’. It’s not a mental image that I’d want to promote. Horses have ‘breakdowns’ at the racetrack ; we euthanize them. There’s enough negative imagery and misconceptions surrounding people who suffer depression. We don’t need to pile anymore on by using hyperbolic and emotionally charged terms that are deemed obsolete by the medical community anyway.

Secondly, I’m going to focus specifically on Depression disorders, but a lot of what I have to say works for Anxiety disorders as well. I’m doing this to keep this blog post at a reasonable length. I realize that a common misconception that people have of depression is that it’s something you can shrug off. That it’s something that teenagers exaggerate about to the point of making light of it ‘My parents just told me I can’t use the car until I pay for gas and now I’m so depressed!‘. That you’re sad about something and you need cheering up. That you’re overreacting. That you need to get over it. That you’re weak. 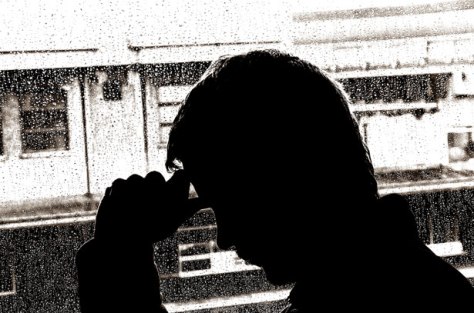 The best description I’ve ever gotten for depression was hearing one sufferer describe it as ‘painting the world in water colours using a black brush’. You don’t just shrug off depression because it colours everything you do and everything you see. Nothing shows through with the vividness it ought to have. You may find yourself crying and when someone asks what’s wrong you honestly reply ‘Everything. Nothing. I don’t know’. Depression isn’t about being sad because you lost something dear to you (although that may be a trigger). It’s so much bigger than that.

As a sufferer of depression you may find yourself sleeping most of the time, not eating enough or eating too much. Gaining or losing weight respectively. Your personal hygiene may have taken a noticeable turn for the worse as your fatigue rises and your morning ritual of ablutions becomes far too much effort. Work productivity drops as you find you can’t concentrate…if you’re able to drag yourself in to work. Activities that you once enjoyed are no longer enjoyable and you have random and/or undefined aches and pains. You’re irritable and may lash out at people when they try to console you. There may be a sense of hopelessness. Even knowing that your problem is depression, you don’t know how you could ever manage to get through it, so what’s the point in trying? You know you can’t get over and you know this because you start realizing how worthless you are. It may even lead to thoughts of ending your life to escape the physical and emotional pain that you’re experiencing. Those pains are real.

“Depression is such cruel punishment. There are no fevers, no rashes, no blood tests to send people scurrying with concern. Just the slow erosion of the self, as insidious as any cancer. And, like cancer, it is essentially a solitary experience. A room in hell with only your name on the door. I realize that every person, at some point, takes up residence in one or other of these rooms. But the realization offers no great comfort now.”

— Martha Manning, Undercurrents (1994)
author/therapist who has dealt with major depression

We haven’t yet pinpointed what causes depression. Like so many other issues that involve the brain, this is one where much research is still needed. This is why the firm statement that we know what it is and turning it into a bragging point of how awesomely strong you are annoys me so much. Experts currently believe that depression is caused by a combination of genetic, biological, psychological, and social factors. So your Family History, Brain Chemistry, Hormones, Coping mechanisms, stress levels, and environment all play their parts in the game.

We know that if you scan the brain of a person with depression it will appear differently than that of someone who is not suffering this disorder. So yeah, it’s a real thing that we can see with science. What we don’t know is why. We know that if you’ve suffered depression once there’s an increased chance that you’ll suffer it again. We know that women suffer depression about twice as often as men. Women have the additional triggers of monthly hormonal fluctuations and postpartum issues to deal with. This makes it a gendered illness, and unfortunately means it’s less likely to be taken seriously.

One of the most common theories is that depression is caused by an imbalance in the neurotransmitters in the brain. What backs up this theory is that drug treatment with those neurotransmitters (Serotonin, Dopamine, Norepinephrine, for example) appears to treat the symptoms of depression in many people. The scary thing is that I had to use the words ‘appears to treat‘. We still aren’t totally sure why modern anti-depressants work and finding the right one or combination of drugs can be a hit & miss affair.

I think the most important thing about understanding depression is accepting that it is an illness, that it isn’t your fault, and that there are treatment options. You probably can’t deal with this all by yourself. You’re gonna need some outside support. You can find your way out if only you will reach out for support. Although the journey may not be an easy one.

For those that are dealing with loved ones who are depressed, the important thing to understand that you can’t take someone else’s depression personally. You didn’t cause it. You can’t cure it. Their irritability is likely a symptom of the illness. An illness they may not even realize they have. One of the tricky things about the brain is that it sucks at diagnosing problems with itself. You can nudge someone in the direction of getting help, but it’s something that should be done gently. The fact that there are so many negative emotions and ideas balled up in the phrases ‘mental illness’, ‘get help’, ‘see a psychiatrist’ means that you need to choose your words very carefully.

So, like last weeks post on Dream reading, this myth is the result of people claiming to know more than we actually do and trying to pass their opinions off as fact. The difference is that this one can actually contribute to harmful misconceptions.

For further reading on Depression (or to check to make sure that I’m not full of shit) :
The National Mental Health Institute
Depression Hurts
Help Guide (Depression)
Centre for Addiction and Mental Health